The Archeological Park of the Tombs of Via Latina in Rome

Art, architecture and a plunge into the myths of the Tuscolano neighbourhood

Right in the middle of the Tuscolano neighbourhood, next to via Appia Nuova, the Archeological Park of the Tombs of Via Latina can be found, easily reachable by walking down via Arco di Travertino, which is also the name of the metro stop.

The park was founded halfway through the XIX century with the intention of safeguarding an enormous historic and artistic heritage that stretches from the republican Roman era to the Dark Ages.

Let’s take a walk through the artefacts in this part of the Agro Romano, and discover what awaits us in the Archeological Park of the Tombs of Via Latina.

You may also like:
Appia Antica Park, the green heart of Rome

The Corneli or Barberini sepulchre: “the tomb of tombs”

At mile 3 of via Latina we can find the Corneli or Barberini sepulchre (named after the last owners of the land), which dates back to the II century d.C.. Now it’s finally open to the public for guided tours after the major restoration, completed in November 2017.

Until the end of the 1800s this space was utilised for farming and keeping livestock, ensuring its exceptional preservation. Of all the tombs in the park, it’s the only one that is still intact with its two floors above ground and one underground.

The director of the Park, Rita Paris, calls it “the tomb of tombs” because it’s a great example of a well-kept funeral structure of great artistic prestige.

If you’ve been to the Vatican Museums you’ll probably remember the sarcophagus that recounts the myth of Protesilaus and Laodamia which was found here. Perhaps the story of love and death of the young couple is a sign of the devotion and the strong bond between them, which is a recurring theme on many of the other tombs. 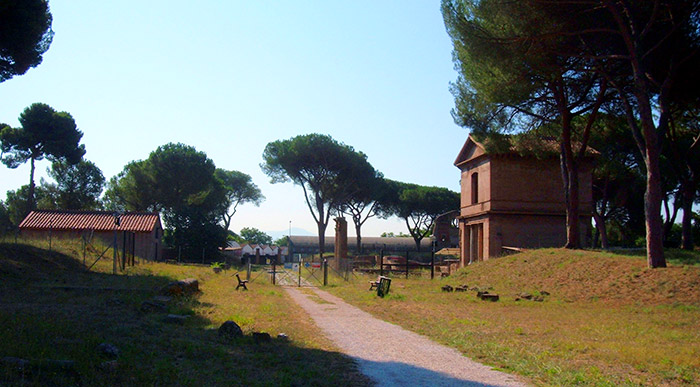 This luxuriously decorated funeral structure is well worth a visit. The building is made of skilfully created of red and yellow polychrome bricks. On the main floor, you will walk over the very same floor where funeral rites were held in ancient times, and where feasts and celebrations that the spirit of the deceased could attend and enjoy took place.

The Valeri sepulchre: the secrets and mysteries of the afterlife

Let’s take a look at the Valeri sepulchre for a moment. Its tomb chambers, two above and one  underground were restored in the 1800’s to guarantee the preservation of the stuccos and frescos that decorate it.

Here we can find a summary of the mythology and funeral symbolism of the ancient roman paganism: the female figure riding a griffin which is painted on the ceiling tells us how the soul of the dead was carried toward the sky, accompanied by Nereids which are similar to guardian angels.

You’ll also see Pistrichs, marine monsters with serpent tails representing the fear of the unknown, dancing with satyrs and crazed maenads.
It’s incredible how these decorations display so vividly the dreams, folklores and traditions of this ancient population.
Close by you’ll also find the ruins of a Mansio, namely a way station, where travellers could find solace after a difficult journey.

The Pancratii Tomb: the myth of life and death

7 of the 8 sarcophaguses of the Pancratii Tomb, opposite the Valeri sepulchre, are kept in the Vatican Museums. Here the collection of myths and stories is breathtaking: the judgement of Paris, who has to deliver his prize to Venus, Minerva or Juno; Priam, father of Hector, who, burdened with many gifts, begs Achilles for his son’s body; Hercules, deified after his death, and a satyr who together play music for the gods; the myth of Alcestis who sacrifices herself for her husband Admetus and that’s just to name a few. The large number of artworks symbolise the importance and worth of the deceased, both in terms of conjugal fidelity and heroism and prestige, which were all celebrated both in life and in the afterlife.

Exploring the afterlife: underneath the Park of Via Latina

In this microcosm where the dead and the living have met and meet still, we can only expect more surprises from the underground. The excavations of the Fortunati have revealed a mosaic flooring checkered in black and white, many other tombs, sepulchres and sarcophaguses, as well as rooms, tunnels and entrances. There’s even a map of the underground layout of Rome that to this day is still being updated.

The park has even more tombs and monuments to offer: the Baccelli Tomb, the Calpurni sepulchre, the Demetriade Villa, the ruins of the Basilica di Santo Stefano Protomartire… go and discover them all!

If you want to visit the Archeological Park of Via Latina, you can stay at Casa Fratocchi