MU.Ro: on the walls of Rome. Street Art between Tuscolano and Quadraro

The voice of the people out of a spray can

Between the neighbourhoods of Tuscolano and Quadraro, 15 minutes away from the Fratocchi household, right where there used to be empty, soulless, grey walls, we can today find countless works of art, all part of a route extending to Prenestino Labicano. This is a path two kilometres long, through an open air art gallery that has won the city of Rome the reputation of a European capital for street art. The project is called MU.Ro, The Urban Art Museum of Rome.
Let’s get to know an alternative Rome, that gives voice to the soul and people of the capital.

Want to spend a couple of days visiting MU.RO?
Consider to book a very close apartment

The history of MU.Ro. A “Renaissance of public contemporary art”

In December 2010, a well-known roman artist called David “Diavù” Vecchiato, painted “Quadraro People”, the mural that gave way to a project that would be made official in 2012 thanks to the support of the V District (ex VI) and the Province of Rome.
We’re not talking of careless scribbles, but known artists, who, with a paintbrush in one hand and a spray can in the other, make wonderful art and give a voice and a sense of belonging to the area and its inhabitants.
The community is in fact at the base of MU.Ro as an organisation. Two key concepts, both strongly tied to the values of street art, outline the MU.Ro artworks:

It can certainly be considered a very stylish return to public art, as recently many artists and ‘starchitects’ have barricaded themselves underneath a glass bell, creating artwork that is incomprehensible to many people. 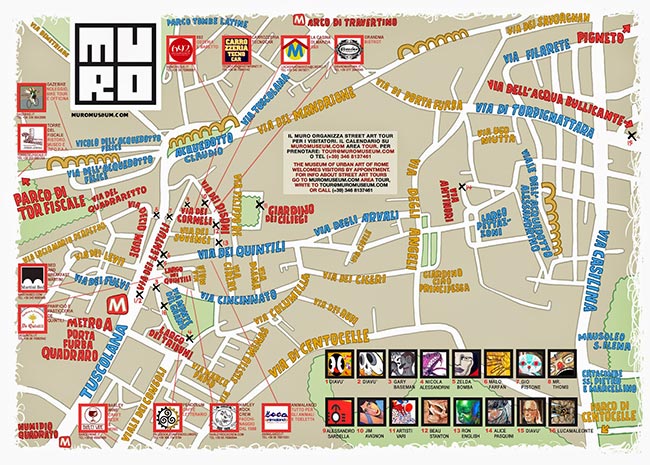 What do these murals represent? Unique symbols of a working class area, coming from the cinema, or with satirical and historical references. Stories told or heard on the streets, the voices of the neighbouring Cinecittà, the ramblings of the barber “who knows everyone”: these are the underground secrets and stories that the painted walls bring to the surface. The true soul of the neighbourhood. But some murals also express political views. Street art is famous for the way it ties into politics so naturally, seeing as it’s visible to everyone. The creation of these pieces of art isn’t an imposition from above, but is the fruit of collective consent of the people.
A walk through these colourful walls can give you a good idea of the atmosphere that surrounds Tuscolano and Quadraro.
Some examples? The long line of mice near the metro stop Arco di Travertino, signed by Omino71, is called “Many friends, much honour”, a play on the infamous fascist motto.
An icon like Totò, that romans are very fond of, was accurately portrayed by Diavù himself, with the body of a cartoon character called Diabolik. In via Decio Mure Mr. Thoms painted the “Risucchiatore” around the arc of a tunnel, a creature that sucks into its mouth road signs, vases, bottles, bolts and light bulbs.

Thanks to the self-financed system of this open-air museum, the organisation can participate in competitions, commissioned works and receive more and more recognition. Faithful to the values of street art, MU.Ro didn’t even sell itself out when Netflix commissioned Luca Zamoc to create a huge mural in Pigneto to promote the series Suburra. Diavù explains how he and the artist, Zamoc, talked with the famous streaming website, and managed to reach an agreement on how to go about creating this first example of ad mural, and how to make sure the artwork could have a life beyond the Netflix series.

The streets recount the story of a city when we travel. And if, in addition to the people, the walls have the chance to speak to us, our relationship with these places becomes all the more intense and emotional.
If you’re in the neighbourhoods of Tuscolano and Quadraro, take a tour– on foot or by bike. On the official MU.Ro website  where you’ll find all the info.

If you want to stay in a place not far from the Museum of Urban Art of Rome, between Tuscolano and Quadraro, book a holiday home at Casa Fratocchi. 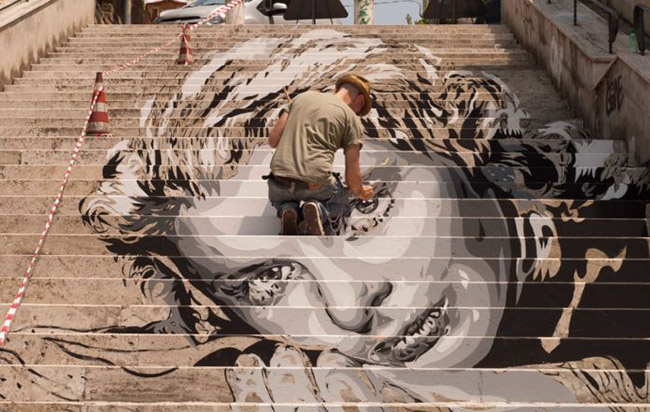