Where to eat best Maritozzi in Rome? Pasticceria Regoli! 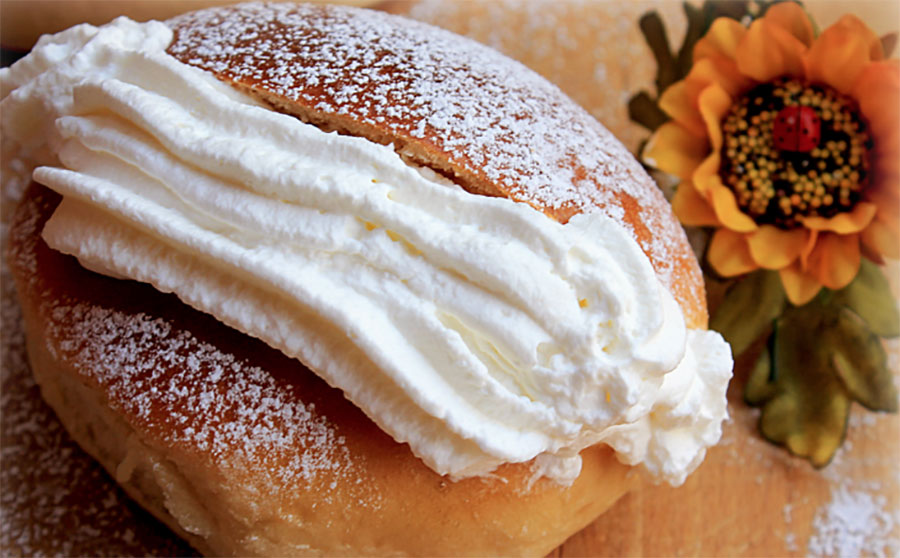 The tasty side of Rome! Maritozzi, a traditional breakfast

The maritozzo isn’t simply a traditional roman pastry. It’s an institution. Respected and esteemed as though it were a divinity, the city pays tribute to it 12 months a year. Romans often have it for breakfast, instead of a cornetto, or coming back at the first light of dawn from a late night out.

Often only one isn’t enough, so some roman bakers offer the mini versions, so you can eat more without feeling too guilty. Last December Maritozzo Day was celebrated, where many bakeries and restaurants got creative and offered all kinds of versions, sweet or savoury, traditional or gourmet.

You may also like:
Where to eat in Rome, 3 restaurants near Arco Travertino

But what exactly is a maritozzo?

What is a maritozzo?

Traditionally the maritozzo is a sweet sandwich filled with cream, flavoured with raisins and sometimes orange rind. A tour of all the best bakeries in Rome where everyday these delicacies are made might confuse us. Like any tradition, maritozzi too have evolved and changed to meet the new dietary habits of the people. Starting with the dough. The traditionalists will insist that the maritozzo is made with water, flour, yeast, butter, sugar and a pinch of salt. But you’ll easily be able to find lighter versions, vegan friendly ones with oil or margarine replacing the butter, slow rising, made with wholewheat flour, etc.. That’s to say nothing of the fillings: beyond the classic whipped cream you have custard fillings, ice cream, zabaglione, pistachio cream, chocolate cream and so on.

Which maritozzi are absolutely not to be missed while in Rome? You can start by not moving far, because in the Monti neighbourhood we’ve got the Pasticceria Regoli, in Via dello Statuto 60. Its filled sandwiches have gone around the world!  They’ve stayed in the hearts of  Japanese and Koreans, who have put the Regoli bakery in their television programs and guided tours. The Regoli family, with more than a century of experience, produces high quality maritozzi (with special attention to the quality of the ingredients) in large quantities. A maritozzo for purists, baked during the night and ready to be filled with cream in the morning.

The maritozzo is of the people!

The maritozzo has become an icon and a trend for both for normal people and famous personalities. Nanni Moretti, Sergio Castellitto and Liza Minelli, all of whom love maritozzi, have been spotted in the Romoli bakery in Viale Eritrea, but it’s important to note that these are historically pastries of the poor. Gioachino Belli, the teller of roman tales, talks about them in Er padre de li santi. This sonnet tells of the possible origins of the name, similar to “marito” which means husband. In these times, as a pledge of love, on the first Friday in March, men would hide a ring inside and give them to their future wives. During the Lent fast when stomachs grumbled, maritozzi made with honey and raisins or sometimes pine nuts and candied fruit with a sugar glaze, were allowed, and they were called Quaresimali (for Lent).

I think I’m having a sugar crash… see you in the bakery!

Do you want to begin your roman holidays with a Regoli maritozzo, just round the corner? Book the holiday home San Martino View ai Monti.