Where to sleep to attend Rock in Roma, summer music festival in Rome

Set off from Arco di Travertino: grab your rucksack, take the metro and prepare yourself for a rock’n’roll summer at the Rock in Rome, from the 20th of June to the 26th of July 2018. The roman summer music festival celebrates its 10 year anniversary with national and international artists on the same level as Roger Waters and The Chemical Brothers.

10 years of activity, new locations and international artists for a rock’n’roll summer

This might also interest you:
Where to eat in Rome: 3 restaurants to try near Arco di Travertino

A summer music festival with an international atmosphere: Rock in Roma

With one and a half million spectators for its 10th anniversary, the founders of Rock in Roma, Sergio Giuliani and Max Bucci, have finally realised their dream. To create a festival with an international atmosphere, that would attract artists and spectators from all over the world.

The sound of guitars and snare drums fills the air for more than a month packed with unmissable concerts. If you’re on holiday in Rome between the 20th of June and the 26th of July, choose the soundtrack of your rock’n’roll summer at the incredible summer music festival in Rome.

In the lineup of Rock in Roma you’ll surely find something you like. 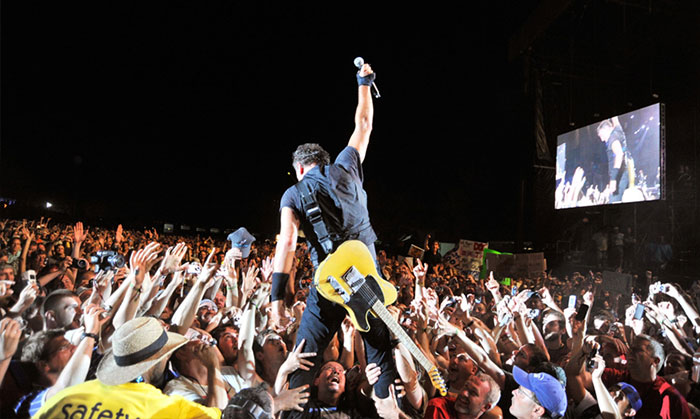 Like any respectable city, Rome has an open air soundtrack to accompany its summer nights. As well as keeping the location of the Ippodromo delle Capannelle as tradition, this year 3 other musical spaces will host Rock in Roma, each a perfect fit for the artists for whom they are destined for.

From Arco di Travertino to the Ippodromo delle Capanelle: the heart of Rock in Roma

To get to the Ippodromo delle Capannelle, the main location of the festival, Arco di Travertino is a good place to start. In this location the majority of artists will be performing, from Italian rap stars to pop and rock artists from across the ocean. The opening performance will be The Killers, the 20th of June: feel free to let your hair down and dance like it’s your last day on earth. If you’re looking for something “heavier”, wait for the metalcore of Parkway Drive on the 26th of June and the trash of Megadeth only two days later. In Italy, just like in any other country, rap, hip pop, trap and variations of it are really living a golden age. At the Rock in Rome before the closing performance by Fabri Fibra, on the 26th, many others will perform, including Post Malone, Mannarino, Sfera Ebbasta, Carl Brave x Franco 126. Myles Kennedy will be performing as a soloist, with a storytelling blues. But there’s more: Coez, The Chemical Brothers, Lo Stato Sociale, De André canta De André.

How to get to the festival Rock in Roma 2018

Where to sleep if you want to attend Rock in Roma?
Casa Fratocchi is the answer